The Welsh Pony is a horse available in Star Stable Online.

"The wild horses which can be found on South Hoof are Welsh ponies which have lived freely on the rocky peninsula for hundreds of years. The Welsh pony is a small, durable and robust breed which can be found in all kinds of coat patterns except for pinto and patterns in the leopard complex group. Welsh ponies have a calm temperament which is appreciated by adults and children alike. In spite of it’s size, they’re brave, active and actually pretty good at jumping! The welsh pony is a very satisfying breed to work with, and there are very few areas in which it’s not an outstanding horse to use.

It’s said that the Winterwell family were responsible for bringing the Welsh pony to Jorvik towards the end of the 18th century. At the time, South Hoof and the beach outside New Hillcrest were still connected but after the massive explosion known as ‘The Great Thunder’, the route to South Hoof was destroyed and the horses living there were separated from the Winterwell family. The Horses were soon forgotten and they built their own life in and around the cold, harsh landscape of the South Hoof Peninsula." 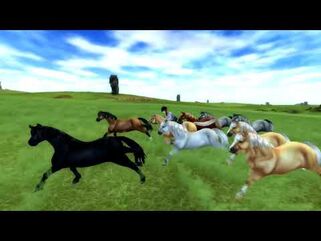 "For thousands of years Wales has been home to the beloved Welsh Pony. The breed was shaped by the land and the people, developing into a hardy and durable pony that thrived in tough conditions. Some have survived as wild herds, dating back countless generations, others worked alongside farmers while others still were pampered by royalty. By the Middle Ages the breed was established as a strong and speedy pony, just as suited for pulling a plow as it was charging into battle, and came in a variety of sizes. It wasn’t until the 1900s that they were formally divided into sections in stud books based on height and build.

Rumor has it the wild Welsh Ponies of South Hoof were originally owned by the Winterwell family, forgotten and left to roam free. This suited them fine, the ponies flourishing on the peninsula. But their adaptability meant many Jorvegians had a Welsh Pony companion, perfectly suited for work, war, and leisure in Jorvik’s climate. They are quick learners, taking to any discipline they are trained in, with the classic friendly pony personality. They are just as varied in their coats, coming in all solid colors.

This Welsh Pony is the riding type, or Section B, and is the lightest of the Welsh Pony types. Though more refined they have not lost their mountain pony heritage and are still as tenacious and ready to gallop over any terrain. All they need is a friend to travel with who can keep up with their stamina!" 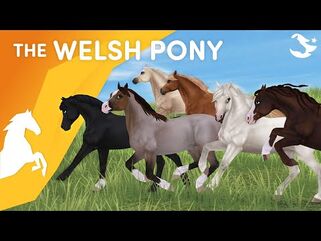 The Gen 3 Welsh Pony can perform a special move called the Bounce. It is similar to an imperfect and unbalanced Levade. The animation can be activated by pressing the spacebar, but only when standing still, otherwise the horse will jump instead of performing the move.

Five hairstyles can be purchased for the Gen 2 Welsh Pony at the Horse Stylist.

Eight hairstyles can be purchased for the Gen 3 Welsh Pony at the Horse Stylist.

The Gen 2 Welsh Pony is sold for 390 SC. All seven variations of the Welsh Ponies can be found on the hill above the Hermit's cottage on South Hoof Peninsula.

The Gen 3 Welsh Pony is sold for 800 SC. They can be found at the following locations.

A Welsh pony is available in Star Stable Horses. The fully raised foal can be bought for 800 SC.