The Vega is a fictional pony breed in Star Stable Online. It is a variation on the Zony and was created by Ydris with the help of his Pandoric magic.

"Born upon a wish of a star, Vega is a dazzling variation of Ydri's [sic] Enchanting Zony.

When Ydris granted Mario's wish, he wrapped a Jorvik Pony in a twinkling blanket of stars, and thus Vega was born. Despite the Jorvik Pony's usual attentiveness, the effect of the glistening coat has an opposite influence on the Vega's disposition. Vega has a dreamy temperament and is often entranced by the constellations in the night sky.

The astral Vega loves any foods that remind them of stars in the shimmering sky, their favorite being sunflower seeds.

All the wishes that Jorvegians have made to the stars are intertwined on Vega's sparkling blaze." 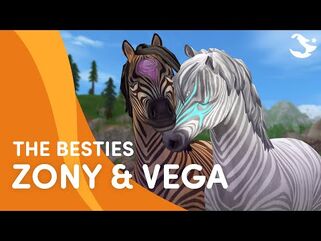 Unlike regular horses and ponies who whinny and neigh when rearing, the Vega seems to have taken it's vocalizations from it's Zebra side. When the player makes the Vega rear, it will bray like a zebra.

Five hairstyles can be purchased for the Vega at the Horse Stylist. These styles are identical on all Gen 3 Jorvik Pony, Zony, Vega models.

The Vega is sold for 550 SC. It can be found at Ydris' Circus on Nilmer's Highland and comes in one variation.