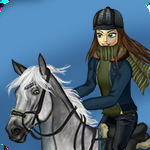 Bureaucrat Admin
822 Edits since joining this wiki
April 27, 2014
0 Discussion posts
I'm the founder of the Swedish Jorvikipedia, and have recently been able to adopt the English Jorvikipedia. I'm 20 years old and live right outside of Stockholm. I play SSO as Esmeralda "Esme" Silverforce on the first Swedish server (usually called Air Star) and have been playing since the game was released in October of 2011. I'm very fond of writing, painting and editing, and love to try new stuff in Photoshop.

Esme Silverforce can be found on the server Air Star and is a part of the small club Night Guards. She lives in the Jorvik Stables with a bunch of pretty horses, is fond of discovering new places and dislikes fishing.

Penelope "Penny" Kinglee can be found on the Swedish server Fluffy Unicorn and is the owner of the inactive club Silversong Kings. All of Penny's horses and pets are named after Pokémon, with her very first horse being a Jorvik Warmblood called Firehoof "Rapidash". Penny is the main character in my walkthrough of Star Stable Online - My SSO Ride Through.

My third account is the one that's both the most and the least famous. Esmeralda Kinglee is the account I use when I record the Star Stable Tutorial videos, which are written, recorded and edited by me and narrated by Star Stable Archie. The videos can be found on Star Stable's official YouTube channel.

Esmeralda Kinglee is located in Europe and are usually on one of the Swedish servers.

Retrieved from "https://jorvikipedia.fandom.com/wiki/User:Zijena?oldid=9416"
Community content is available under CC-BY-SA unless otherwise noted.