"The Trakehner (or "East Prussian Warmblood Horse of Trakehner Origin," as it is correctly called), is the lightest of the modern European warmbloods.

Originally, the term Trakehner was reserved for horses bred at the stud farm in Trakehnen (now Yasnaya Polyana in Russia), where over two centuries the breed was refined and gained renown, first for use by the military and later in competition.

After decades of careful breeding, the Trakehner was brought back from the brink of extinction. That discipline continues to this day as to be allowed into the official stud books, young horses undergo an extensive evaluation process to assess their qualities as riding horses.

Due to their high percentage of Thoroughbred genes, the Trakehner is an elegant horse, and is frequently used to refine other warmblood breeds.

Modern Trakehners are extremely successful in all areas of equestrian sports, especially eventing, where their versatility in both jumping and dressage makes them shine.

Riders looking for a majestic partner in the riding hall or a friend to conquer the toughest terrain, look no further than the Trakehner." 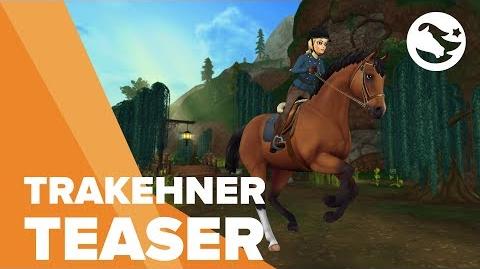 Five hairstyles can be purchased for the Trakehner at the Horse Stylist.

The Trakehner is sold for 750 SC. The six available colors can be found in the following locations:

A Trakehner is available in Star Stable Horses. The fully raised foal can be bought for 750 SC.