The Songsorrow is a fictional horse breed that is available in Star Stable Online.

"Jorvik is rich with tales of nature spirits appearing as horses. Two of those spirits are strongly linked to grim stories reminding the listener that appearances are deceiving. The Duskgrim of the barren mountains look deadly even though they come to help. On the flip side the Songsorrows seem tame, even pitiful, until it is too late to escape the vicious water horse.

The Songsorrows are Jorvik’s waters given threatening form. Nearly every beach, river, and lake has at least one story of a Songsorrow. In some accounts the water source was created by the horse’s tears after losing their rider, and now the spirit waits for their rider’s return, crying a haunting song that lures the unsuspecting onto their back. The person may be released when the Songsorrow realizes the human on their back is not the one they are waiting for. The other possibility is the Songsorrow, in a grief stricken rage, will drag the human into the water never to be seen again. Deadlier waters tend to have stories of Songsorrows not driven by mourning but malice, using their song to intentionally draw in victims who rarely escape a watery grave. The main similarities across all the legends is that the spirits sing and create sorrow, intentionally or not.

As a legend intrinsically tied to Jorvik’s landscape it is no surprise that they appear as Jorvik Wild Horses. They disguise themselves as beautiful, if otherworldly, white horses to hide their true watery appearance. Seeing their true form is a sign of trust, whether as a friend or as a victim who won’t share the secret is up to you.

Songsorrows, as embodiments of water, are versatile in temperament. They can be calm or dangerous, frozen or boiling, and should be treated with caution. To befriend a Songsorrow is no easy task as they are willful creatures, demanding time and patience to overcome their emotional and volatile nature.

Or perhaps you are the one they have been waiting for all this time?" 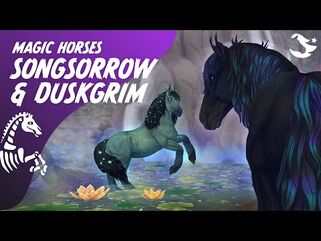 The Songsorrow is a magical horse with the special ability to change colors. When the player presses the "h" key or the magic horse icon on the horse's character sheet, the horse will change from its neutral colors to its natural (magic) colors and vice versa. The horse will not change colors during races or while the player is unmounted.

While most breeds in SSO only have five gaits, the Songsorrow has six. This special gait is called the "Mezair," a gait derived from the Airs Above Ground move by the same name. To make your horse do the Mezair, the horse must be walking. The player then must hold down the Shift key and then simultaneously hit either the up arrow or the 'w' key. The Songsorrow will then begin to perform the special gait. During the Mezair, the horse cannot move to a faster gait or jump. To stop the Mezair, simply slow your horse down like you would with any other.

The Songsorrow can perform a special move called the Lay Down. The animation can be activated by pressing the spacebar, but only when standing still, otherwise the horse will jump instead of performing the move.

The Songsorrow sports moderate feathering on its legs. This long hair covering the horses' canon and fetlock means that the Songsorrow cannot wear leg wraps or open front boots in the game.

The Songsorrow is sold for 975 SC and can be purchased during Halloween in Galloper's Keep. It comes in one variation.