The Shire Horse is a breed available in Star Stable Online.

As well as being big, the Shire is also strong, and it’s said that it can pull up to five-and-a-half tonnes without a problem. This made the Shire horse a popular warhorse in the middle ages as it could carry a soldier wearing heavy armour. As knight’s armour began to disappear, the Shire became more and more widely used as a workhorse. Now those days are gone, the Shire horse is most popularly known as a parade and draught horse." 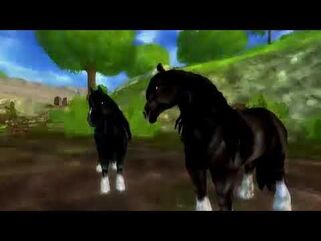 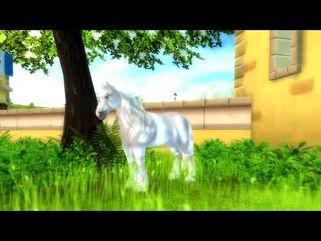 "The magnificent Shire is a draft horse hailing from England. In the 1800s, Shires were used to pull barges, ploughs, and carts, and were instrumental in moving goods from the docks through the cities and countryside. With the advancement of technology, the need for workhorses diminished and the population of Shires dwindled to a vulnerable number.

Shires hold records for height and strength. Other characteristics are the considerable feathering on their legs and the impressive size of their hooves. A cold-blooded breed, Shires are inclined to work and eager to please.

Shire horses were brought to Jorvik by the Silverglade family, who prized them as grand carriage horses. Although this horse is a force of nature, its docile temperament makes it a good companion to any rider." 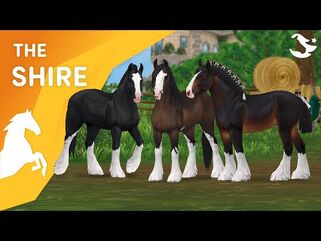 The Gen 3 Shire can perform a special move called the Lay Down. The animation can be activated by pressing the spacebar, but only when standing still, otherwise the horse will jump instead of performing the move.

Five hairstyles can be purchased for the Gen 2 Shire at the Horse Stylist.

12 hairstyles can be purchased for the Gen 3 Shire at the Horse Stylist.

The Shire sports heavy feathering on its legs. This long hair covering the horses' canon and fetlock means that the Shire cannot wear leg wraps or open front boots in the game.

The Gen 2 Shire is sold for 475 Star Coins. The eight variations can be found in Ferdinand's Horse Market:

The Gen 3 Shire is sold for 900 Star Coins. It comes in seven variations and can be found in the following locations:

A Shire is available in Star Stable Horses. The fully raised foal can be bought for 900 SC.