The Shadowshield is a fictional horse breed in Star Stable Online. 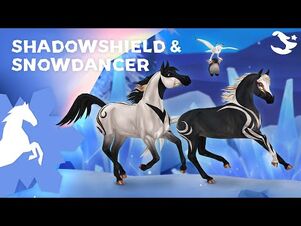 "One winter night a woman was traveling home through a forest. Brigands found her, but before she was robbed a mare appeared from the darkness. The woman climbed onto the offered back and the mare raced away, chased by the bandits. When the mare reached open fields illuminated by starlight she stopped, the woman frozen in fear as the robbers neared. But the brigands galloped past, the mare creating a shield of darkness that hid her and the woman. With the danger gone the mare carried her rider home. The woman thanked her savior with food and a warm stall to rest in, and in the morning the mare was gone. The woman no longer found winter nights cold, and she never lost her way at night again.

Shadowshield is one of Jorvik’s night spirits, a kind horse who guards those who venture into the darkness. She is happiest when racing with the Snowdancer stallion, as they are the snow under a clear night sky, glittering in the starlight. Every winter they meet, dancing and running together through and above the snow, the darkest night of the year meeting with the brightest white snow.

Shadowshield takes the form of an Arabian, a breed as enduring as the night sky. Like other magical Jorvegian horses they can disguise their true colors and gold markings, especially if they don’t trust a person. They are gentle and protective, tending to stay back and quietly observe. They respond to praise and gratitude, glad when their efforts are rewarded. If you match their gentleness and appreciate the silent moments, you will find the Shadowshield is a natural guardian and life long companion". - In-game description - Star Stable Online

The Shadowshield is a magical horse with the special ability to change colors. When In the wild, it changes from its neutral colors to its natural (magic) colors. When the horse approaches Jorvik's different villages, it regains its more realistic colors. The Shadowshield evolved from contact with energy from Pandoria to the point where its magical ability is entirely its own.

As the Shadowshield shares its model with the Gen 3 Arabian, it can perform their special move called the Walking Rear. The animation can be activated by pressing the space bar, but only when standing still, otherwise the horse will jump instead of performing the move.

The Shadowshield is sold for 950 SC and can be purchased during Christmas in the Winter Village. It comes in one variation.