Devil’s Stew (Her own creation)

Sabine is one of the main antagonists of Starshine Legacy, and Star Stable Online. Her horse's name is Khaan.

Sabine has wavy black hair, kept in a short unkempt ponytail. Her eyes are dark, with an apparent violet hue in them. When not in Dark Rider apparel, she can be seen in a scarlet riding jacket, khaki jodhpurs, and black boots. In the Soul Rider Book Series, she is described to have wide shoulders, void black eyes, and a disgruntled look on her face.

Sabine is stuck-up and rude, but can be deceiving with her words. She is known to be more serious than her fellow Dark Riders, and has a darker demeanour. In the beginning of the game, she is seen as quite impolite, but changes her tune to a happy, more hyper tone to deceive the player.

In Starshine Legacy, she came from a wealthy family, and tried to use this to her advantage.

in Star Stable Online, Sabine pretends to be a normal girl and tries to be a friend the player when they meet at Silverglade Equestrian Center. After introducing herself she asks the player to deliver a letter to Justin Moorland. After Justin had received the letter, and left Moorland with Sabine, she was revealed to be one of the Dark Riders (under the Alias "Dark Rider Malumi"). Sabine is seen several times in Dark Core's secret oil platform, along with the rest of Garnok's generals.

At the player attempts to save Lisa through the Primeval Tree, Sabine stops her by using a deadly magic that neutralises her horse. As she tries to threaten the player through saying 'Aideen's light will be snuffed out forever', Lisa shows up in the nick of time, and Sabine flees via apparition.

At another point in the game, Dark Core desperately tries to stop the druids from completing the keystone, and Sabine appears in Dino Valley, threatening the player to give it to her. After a deadly race, the Soul Riders show up in the nick of time, saving the player from her demise.

Sabine is first seen talking to a janitor in the school, as Lisa listens to the conversation. She tries to convince the man that her cellphone has been stolen, using her presumably rich father as an excuse to get her way. Lisa shows up with the phone, in which Sabine is slightly taken off guard, but thanks her anyway.

As the game continues, she is seen boasting about Khaan, and discourages Lisa from joining Jorvik Stables due to membership being a year's wait. After Lisa takes out Starshine for a test ride, she is seen saying negative things to Lisa to perhaps cause her to be downtrodden.

Starshine soon collapses due to the dark presence of Mr. Sands, and Sabine gathers in the stables with a few others. It is unclear whether she was familiar with Mr. Sands at this point.

After Lisa snoops around the school at night, she comes to the stables, realising Starshine is missing. Anne, Alex, and Herman contemplate what might've happened, before Sabine locks them in the stables, explaining that they could be in trouble if their parents found out, and simply told them to wait for the police to the group's dismay.

After Lisa recuses Starshine from Dark Core HQ, she is chased by Sabine, who is seen in a scarlet hood. Khaan's hooves also glow with flaming fire. She is unable to catch Lisa, who later comes to meet Fripp after the experience. The next day, she races Lisa, and loses much to her embitterment. She tells Lisa that is was merely luck, and that this was far from over.

Sabine is never seen, nor mentioned again in the game series.

Sabine pretends to be a new student at the school where Soul riders study. Together with Jessica, she constantly provokes fights and looks for trouble. She charms Herman to get closer to Starshine and with her powers causes the animal to collapse. Her plan fails as Lisa manages to heal the horse. After this incident, Herman orders Sabine to get out of his stables and never to come back.

Sabine follows Linda as she arrives at the Pine Hill Mansion. With the help of Dark Core employees, she kidnaps Meteor. He also tries to hurt Linda, but then Alex shows up to prevent it and takes her friend from the property. Later, Sabine and the other Dark Riders go to Scarecrow Hill to destroy the golden apple, but during the pursuit of the Soul Riders, she rides over an old bridge, which collapses underneath and falls into the abyss.

Sabine, as she recalls, has never been a human being, and thanks to that she survives a fall from a bridge. She and the other Dark riders return through the forest to the Dark Core headquarters. On the way, she comes across the Soul Riders' camp but decides to go on.

Later on the Dark Core platform, along with the other generals, she deprives the Soul Riders and their horses of magical energy with the help of Mr. Sands and the portal Concorde throws the man into at the end of the ritual. Sabine, Jessica, and Katja are thrown off the platform into the icy water, but once again emerge unscathed. 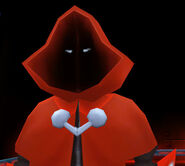 Close up of Sabine in her Dark Rider attire. 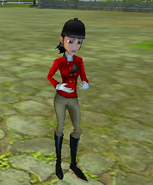 Close picture of Sabine in SSO

Portrait of Sabine In Star Academy

Community content is available under CC-BY-SA unless otherwise noted.