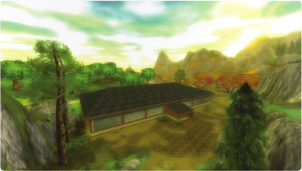 The Riding Arena is an arena located slightly west of Silverglade Manor and The Overlook Chasm. It's owned by The Baroness.

The arena is split into two parts, the A-hall and the B-hall. The A-hall is empty save for a grandstand, and the B-hall is filled with obstacles. There are three daily races in the B-hall: the Baroness' First, Second and Third Show Jumping track.

Retrieved from "https://jorvikipedia.fandom.com/wiki/Riding_Arena?oldid=73167"
Community content is available under CC-BY-SA unless otherwise noted.