The Petra is a fictional horse breed available in Star Stable Online.

"Across Jorvik stand ancient runestones, the legacy of Druid stonecutters working in Aideen's name to protect the island. According to legend, a master stonecutter, through the power of the Star Circle, could imbue runestone with life itself! From such miraculous craftsmanship did Petra gallop forth from the earth.

Petra's hoofsteps can make ground tremble. But as Petra is a gentle soul, they don't want to see the world destroyed by their thundering hooves. That's why you can often find Petra standing still as a statue among nature, allowing vines and flowers to grow on their back.

This relaxed attitude makes Petra an easy-going riding partner, happy to meander trails and stop to munch on moss.

But one must never forget Petra's true nature, as an ancient force of magic born of the land itself. As long as Aideen's light shines on Jorvik, Petra will live on for centuries to come. To ride one is a gift to bond with this horse is to touch the eternal.

Though Petra have appeared throughout Jorvik, wherever runestones lie, these mythical horses seem to be drawn to the Wildwoods, where Jorvik's primal magical energies are strongest.

Like other Magic Horses in Jorvik, Petra prefers to show its true colors in wild places and conceal its appearance in populated areas. Whether in its magical for or disguised to blend in with other horses, Petra rides just like the Clydesdales it most resembles." 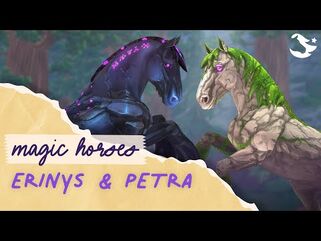 The Petra is a magical horse with the special ability to change colors. When the player presses the "h" key or the magic horse icon on the horse's character sheet, the horse will change from its neutral colors to its natural (magic) colors and vice versa. The horse will not change colors during races or while the player is unmounted.

The Petra sports heavy feathering on its legs. This long hair covering the horses' canon and fetlock means that the Petra cannot wear leg wraps or open front boots in the game.

The Petra is sold for 750 SC and is sold by Gary Goldtooth. It comes in one variation.