"This refined and powerful breed traces its lineage to the horses carried from Spain to the Dominican Republic by Christopher Columbus. The Paso Fino, whose name means Fine Step, is an athlete with a unique gait in two speeds and forms of collection: the Classic Fino (slow, full collection) and Paso Largo (fast, moderate to minimal collection). Paso Finos come in every base color, with or without markings or patterns. A rare few have a genetic trait known as tiger eye—an iris in shades of orange, yellow, and amber. The Paso Fino is popular for trail, endurance, and pleasure riding, mounted games and horse trick shows. The breeders of Jorvik cultivated the natural stamina, smooth gait, and calm temperament of these magnificent companions, so prepare to sit comfortably in the saddle all day"! 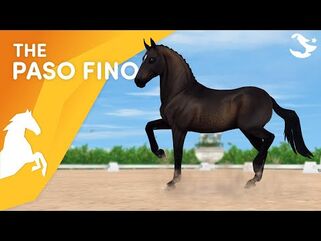 While most breeds in SSO only have five gaits, the Paso Fino has six. This special gait is called the Paso Largo. To make your horse do this gait, the horse must be walking. The player then must hold down the Shift key and then simultaneously hit either the up arrow or the 'w' key. The Paso Fino will then begin to perform the special gait. During this gait, the horse cannot move to a faster gait or jump. To stop the Paso Largo, simply slow your horse down like you would with any other.

The Paso Fino can perform a special move called the Classic Fino. The animation can be activated by pressing the spacebar, but only when standing still, otherwise the horse will jump instead of performing the move.

Six hairstyles can be purchased for the Paso Fino at the Horse Stylist.

The Paso Fino costs 950 SC. There are seven variations and they can be found at the following locations:

A Paso Fino is available in Star Stable Horses. The fully raised foal can be bought for 950 SC.