The Marwari is a horse breed that is available in Star Stable Online.

"Arising from the sandy plains of Marwar, India, is a regal horse with striking curved ears, often adorned in gold and silver jewelry. A rare breed rising from folklore and legends of horses with wings. Enter the Marwari.

The exact origins of the Marwari are unknown, but they are thought to derive from the mounts of the Legendary Rajput warriors. They went on to become the prized horses of the Marwar region, respected for fighting valiantly alongside warriors in battle.

Though revered by many, life for the Marwari has not been without struggle. The period of British occupation led to the near-extinction of the breed, as they diminished the reputation and condemned the breed characteristics. By the 20th century, the Marwari were teetering on the edge of extinction, but their numbers have been recovering since.

Marwaris have an elegant physique, known for their striking ears that cure inward. They have slim bodies that can withstand the desert heat, and arched necks that add to their unique silhouette. Their hooves are of such high quality that they rarely need shoes.

Very few Marwaris exist outside of India today, but they are revered worldwide for their loyalty and elegance. Their unusual beauty also makes them highly suitable for ceremonies and parades, but the are also used as regular riding horses, and for sports such as polo.

If you're searching for an extraordinary companion that can brave any dangers and look majestic while doing, look no further than the curled ears of the Marwari." 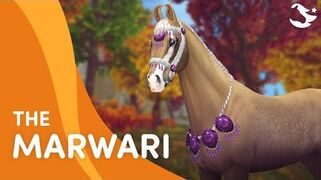 The Marwari can perform a special move called the bow. The animation can be activated by pressing the space bar, but only when standing still, otherwise the horse will jump instead of performing the move.

While all of the horses in Star Stable will technically turn in place when a player is standing still, the Marwari has a special turn animation. When it is standing still, and the player turns their horse left or right, the horse will perform a "Piaffe Pirouette".

Six hairstyles can be purchased for the Marwari at the Horse Stylist.

The Marwari is sold for 950 SC. All seven variations can be found at Goldenleaf Stables: