"Named after 'Lusitania', the Roman name for Portugal, the Lusitano shares many traits with the Andalusians of Spain but has been recognized as a distinct breed since the 1960's. The Lusitano is a modern sport horse originating from a long tradition of noble and renowned riding horses.

Chosen for their athleticism and attentiveness to the rider, the Lusitano was bred to be the ideal riding horse. Be it working with cattle or as covered war horses, Lusitanos are nimble, brave and always willing to do their best.

Today Lusitanos are found in all disciplines, from the highest schools of dressage to endurance to driving and are often found in film productions. These exceptional horses are at their best when challenged both physically and mentally." 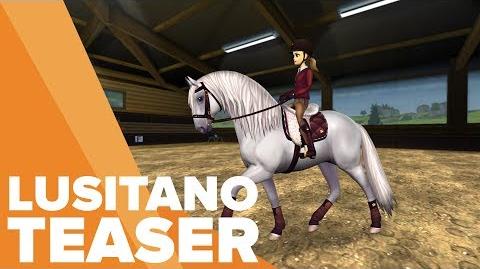 The Lusitano can perform a special dressage move called the Piaffe. The animation can be activated by pressing the spacebar, but only when standing still, otherwise the horse will jump instead of Piaffe.

Five hairstyles can be purchased for the Lusitano at the Horse Stylist.

The Lusitano is sold for 949 SC. There are eight variations and they can be found in the following locations:

Note: Horses marked as "Limited Release" are only in the game for limited periods of time and are not always available.

Two Lusitanos are available in Star Stable Horses. The fully raised foals can be bought for 949 SC.