The Lipizzaner is a horse breed available in Star Stable: The Spring Rider and Star Stable Online.

"The Lipizzaner is an elegant horse with a natural ability to perform extremely difficult maneuvers. It is popular with certain schools and for dressage. The famous Spanish Riding School in Vienna uses nothing but Lipizzaner horses. " 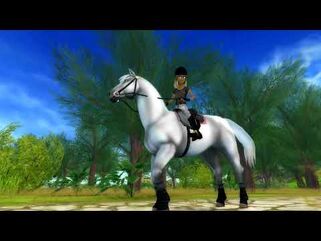 Lipizzaners have a special feature that is unique to their breed on Star Stable Online. They can Levade, a controlled rear-like action that is based on one of the traditional "Airs Above the Ground" movements taught in real Lipizzaner riding academies all over the world. The animation can be activated by pressing the spacebar, but only when standing still, otherwise the horse will jump instead of Levade.

Five hairstyles can be purchased for the Lipizzaner at the Horse Stylist.

The Lipizzaner is sold for 949 Star Coins. The four available variations can be found in the following locations:

The Dapple Grey, Fleabitten Grey, and Steel Grey variations have been removed from the game and will not be returning.