He is a jet black Jorvik Friesian with his mane done up in a French Braid. His most notable feature is his bright red eyes with no discernible sclera or pupil.

Khann is a corrupted Starbreed forcibly bonded to Sabine. He is used by the Dark Riders to corrupt the land in their goal of setting Garnok free. When ridden by Sabine, Khaan leaves firey hoof prints behind. He does not appear to be able to speak or be in control of his actions.

Khaan is an Urdu and Pashto title meaning "king, ruler". It is suspected to originate from Mongolian, however, the word has been transmitted into many other languages. 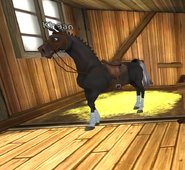 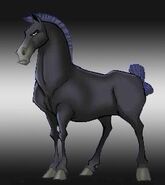