Katja appears in an all white, almost icy blue outfit. She has light skin, and shoulder length white hair with bangs. Her eyes are blue. She wears a white turtleneck with a white coat over it. She wears a white skirt, white knee high socks and white boots.

Katja is better behaved than her fellow Dark Riders, and has a classier attitude towards the Soul Riders and player. She is not rude nor friendly, and comes off as chic and cold. She is extremely confident in herself and Garnok’s capabilities. Katja is not very expressive and does not lose her temper, unlike Jessica.

Katja first appears after Alex confronts Buck for bullying James. Calling Alex pathetic, she challenges her to a race at Scarecrow Hill. Alex accepts, and the two meet at the stables later that night, with Herman, the Soul Riders, and Buck to witness the race. Both girls are confident they will win, and argue before the race.

Using her abilities to cheat, Katja wins the race. Suddenly having a change of heart, she asks to stop fighting with Alex and apologizes to James for Buck’s bullying. She asks to “kiss and make up”, kissing James on the cheek. This puts a spell on him, and the following day he goes missing.

Communicating with Alex through Linda’s visions, Katja shows that she has kidnapped James and has his mind under her control. In exchange to free James, she wants Alex to hand over Tin Can. She tells Alex to meet her at Devil’s Gap, or James will be “gone forever”.

Katja is challenged by Alex to a duel following the Codes of Pandoria, which Katja has no choice but to accept. Instead of duelling Alex herself, she commands Buck to duel Alex. Alex wins the duel, and James is freed, but is still hypnotized by Katja, and she refuses to free him from her spell, claiming his soul is still hers to keep. Alex challenges Katja to another race in order to truly free James.

Katja loses the race at Devil’s Gap, and following the Codes of Pandoria, she frees James for good. She claims she’ll be banished from Jorvik, but tells Alex that she has not truly lost, as Garnok will return and their plans have progressed too far to be stopped. After speaking to Alex, Katja vanishes into thin air.

James explains to Alex and the player that he has been having nightmares, likening to the ones he had a few years back when he encountered Katja at Jorvik High School. With the help of Mrs. Holdsworth, it is soon revealed the girl in his nightmares is indeed Katja, and the old woman helps them cease.

On the second visit to Dark Core, Katja is summoned from the portal as the apparent fourth general, the Dark Riders now being four thanks to Justin. Upon later realizing Justin is not skilled with supernatural powers, she, along with Jessica and Sabine proceed to have him eliminated. She doesn't succeed, after being summoned to the oil rig by a false alarm thanks to Mr. Sands.

Soon thereafter, Dark Core begins to spy on the Keepers of Aideen with their drones. The player and Lisa call their bluff, speaking out in the open about Fripp being unwell. The Dark Riders and Mr. Sands buy this, and he proceeds to send out Katja to capture Fripp.

After the player lures the Dark Rider for a distance, she is caught by the three to her confusion. Upon realizing that she was tricked, she is challenged to race by Linda by the Pandoria codex. Katja sets the location at Scarecrow Hill, where she tells the player to meet her.

Upon coming to Scarecrow Hill, she sets the course, and the race begins. The player soon realizes they are not at Scarecrow Hill, but instead in a concoction of one of Katja's nightmarish illusions of reality. Soon after the race, Katja finds amusement at the fact they were tricked, but is then tricked in turn by Alex who bribes her with a false golden apple.

By the code of Pandoria, they were allowed to derive one truth from her, be it any question they could ask. Linda proceeds to ask where Concorde is, and Katja laughs at this question, thinking it daft that they would ask for such a pathetic truth. She reveals that unfortunately he perished, thanks to the Pandorian environment.

The Dark Rider leaves the Soul Riders behind thereafter, realizing her loss was more of a win after all.

A third general arrives in Jorvik via the Hell Portal and gives themselves the human name "Katja". She is greeted by Mr. Sands, whom she calls "the chosen one".

Katja helps Mr. Sands imprison Lisa when she tries to free Starshine. She is also present at the imprisonment of Meteor. Later, she rides with the other Dark Riders to Scarecrow Hill to destroy the golden apple, but while chasing the Soul Riders, she rides over an old bridge, which collapses underneath and falls into the abyss.

Katja, like the rest of the Dark Riders, are not human and survives a fall from a bridge. She and the rest of the generals return through the forest to the Dark Core headquarters. On the way, they come across the Soul Riders' camp. Sabine decides to go on, but after a while, she ponders turning back and scaring the Soul Riders. Katja is dissuading her from this idea. She says that she heard Lisa crying for her dad at night and is sure to come with her friends to the Dark Core to save him, and thanks to their powers, Garnok will be released.

Later on the Dark Core platform, along with the other generals, she deprives the Soul Riders and their horses of magical energy with the help of Mr. Sands and the portal Concorde throws the man into at the end of the ritual. Sabine, Jessica and are thrown off the platform into the icy water, but once again emerge unscathed.

Katja is a Greek name, meaning pure or pure one. In German speaking countries and Scandinavia, Katja is often used as a shortened version of the name Katherine.

In the Winter Riders and Summer Riders, Katja is referred to as Kate. This name is another shortened version of Katherine, and like the name Katja, also means pure. 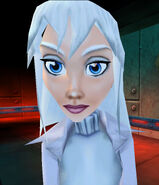 Close up of Katja in SSO 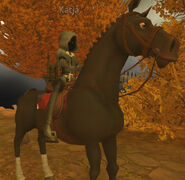 Full View of Katja and Stalker 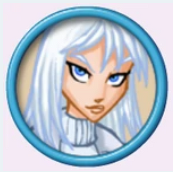 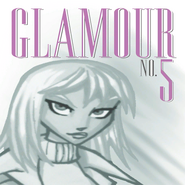 Katja on the cover of the Glamour Magazine 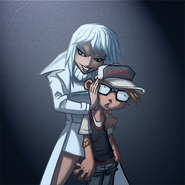