Kampos is a horse breed available in Star Stable Online.

"The swirling seas around the island of Jorvik are teeming with magic and mystery, and from these waters emerge an iridescent horse known as Kampos.

You'll find the serene Kampos in the deepest depths of the ocean, diving underwater in search of hidden treasures on the seabed.

Prolonged swimming in the cool ocean has made Kampos resolute by nature. They are the ideal companions for those who need to keep calm in the face of danger, but this can sometimes be to a fault, as they can be stubborn.

Jorvegian seafarers share fascinating tales of magical sea-horses that only appear when in dire need. In the disastrous event of a shipwreck, the victims that tread the waters often find themselves washed up on the Jorvegian shores completely unscathed.

The last thing they is being pulled out of the seas by a noble iridescent horse, saving them from drowning. They call these horses the Kampos, after the mythological creatures known as the hippocampus.

The origin of these magical hroses is a mystery, but some whisper of a once lush islet off the coast of South-East Jorvik, where magic horses roamed free. Until one tragic day when the land sunk into the ocean, leaving the horses without a home. They say Kampos that have stepped ashore on Jorvik are descendants of the horses from this fabled islet.

Like other Magic Horses in Jorvik, Kampos shows its true colors in wild places and will conceal its appearance in populated areas. Whether in its magical form or disguised to blend in with other horses, Kampos rides just like the Akhal Tekes it most resembles". 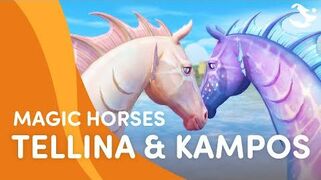 The Kampos is a magical horse with the special ability to change colors. When the player presses the "h" key or the magic horse icon on the horse's character sheet, the horse will change from its neutral colors to its natural (magic) colors and vice versa. The horse will not change colors during races or while the player is unmounted.

The Kampos is sold for 850 SC. It is sold by Gary Goldtooth and comes in one variation.