The Jorvik Wild Horse and subspecies, Embermane, are a horse breed in Star Stable Online and Star Stable Horses. 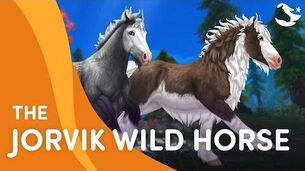 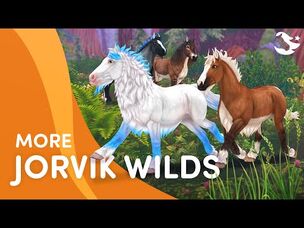 "In ancient times, before humans stepped foot on Jorvik, a wild and primeval horse owned the lands. They thrived in the untamed wilderness, energized by the abundance of Pandoric energy. This horse is known today as the Jorvik Wild

Unlike feral horses who run freely, this breed has never been domesticated and bred by humans. They are creatures of the wild, alert to danger and ready to defend their herd from threats.

Despite being an herbivore, the Jorvik Wild is an alpha of the wilderness. The Pandorian energy that courses through their blood causes other animals of the forest to treat them with reverence. The Druids of old wrote that there exists on Jorvik no creature or human so brave as a Jorvik Wild.

The Jorvik Wild's way of socializing is different than most. As observant creatures, they are highly attentive to the aura of a person. If you're lucky enough to bond with a Jorvik Wild, you'll discover they are social creatures who flourish when surrounded by friends of all species and sizes.

The unusually thick coat of a Jorvik Wild defends them from the elements. Their ear tufts are not only adorable but help the Jorvik Wild to hear from great distances, amplifying the subtle sounds of the forest.

While Jorvik Wilds more commonly appear in natural colors like dappled palomino, blue roan, and bay, they can very rarely possess manes of glowing blue or fiery orange. These unnatural colors are a result of them living in an area of heightened magical energy.

"In ancient times, before humans stepped foot on Jorvik, a wild and primeval horse owned the lands. They thrived in the untamed wilderness, energized by the abundance of Pandoric energy. This horse is known today as the Jorvik Wild

The Embermane Jorvik Wilds are descendants of a special herd of horses, hailing from the densest parts of Jorvik's forests. Here, the ground is arid and susceptible to wildfires.

The constant threat of fire has evolved these Jorvik Wilds to adapt to their dangerous surroundings, making them alert and swift-footed.

The pandorian energy that courses through Embermane's blood causes other animals of the forest to treat them with reverence. The Druids of old wrote that there exists on Jorvik no creature or human so brave as a Jorvik Wild.

With a fiery personality to match their manes, the Embermane's fierce nature means they are a difficult horse to befriend. But behind their burning exterior is a timid and sometimes anxious horse, that wishes to find the security of a human companion.

The cinder-hued coat of Embermane is a stark contrast to the neon orange mane they possess. This is a result of them living in an area of heightened magical energy.

One does not 'break' an Embermane. These horses choose their rider. When you bond with one, it is a mutual exchange of trust. Do you have what it takes to befriend a Embermane?

While most breeds in SSO only have five gaits, the Jorvik Wild Horse has six. This special gait is called the "Mezair," a gait derived from the Airs Above Ground move by the same name. To make your horse do the Mezair, the horse must be walking. The player then must hold down the Shift key and then simultaneously hit either the up arrow or the 'w' key. The Jorvik Wild will then begin to perform the special gait. During the Mezair, the horse cannot move to a faster gait or jump. To stop the Mezair, simply slow your horse down like you would with any other.

The Jorvik Wild can perform a special move called the Lay Down. The animation can be activated by pressing the spacebar, but only when standing still, otherwise the horse will jump instead of performing the move

Three unique hairstyles (including the default hairstyle) can be purchased for the Jorvik Wilds at the Horse Stylist.

The Embermane has a single unique hairstyle that other Jorvik wilds do not have.

The Jorvik Wild sports moderate feathering on its legs. This long hair covering the horses' canon and fetlock means that the Jorvik Wild cannot wear leg wraps or open front boots in the game.

The Jorvik Wild Horse is sold for 975 SC with expectation to Soul Steed which is free for a Limited Time. There are 11 variations and they can be found in the following locations:

Note: While this breed has natural looking coat colors, SSO has given them unique names. 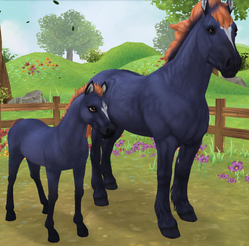 A version of the Embermane JWH that was already in Star Stable Online, was added to Star Stable Horses. The fully raised foal can be bought for 975 SC.