"The typical Jorvik Pony has a sunny disposition but can be a single-minded, mischievous and stubborn little horse. It has short legs resulting in a lower overall height, and a more prominent head than most horses. Because of their small size and chubby build they have difficulty maintaining the speed of other, wild Jorvik horses. While the Jorvik Pony is not really cut out for performance related competition it remains a favorite breed among Jorvik horse owners who love the fun and laughs that come from spending time with this charming little horse. Jorvik ponies come in many different colors." 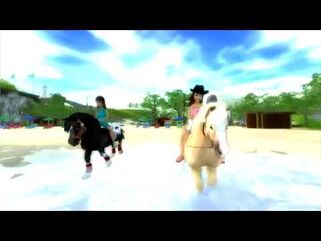 "The Jorvik Pony's roots date back to the colonization of Jorvik, many centuries ago, when it played a key role in the settlement of the island.

These sturdy and strong-willed ponies have played a major role in shaping Jorvik's ware character ever since. Jorvegians count on them as cherished companions, tireless co-workers, and reliable lawnmowers. This pony is and independent thinker, but loyal when it counts.

Throughout the centuries the Jorvik Pony has been crossed with other breeds like the Icelandic, Shetland Pony, and Connemara to refine the tributes that made these ponies irreplaceable.

The typical Jorvik Pony is short with sturdy, strong legs and a short, proud croup. Its deep broad chest and muscular back make it an enduring riding pony.

What it lacks in size, The Jorvik Pony makes up for in ambition and determination. Given the right rider, this unassuming fellow can be an excellent competition pony in all disciplines." 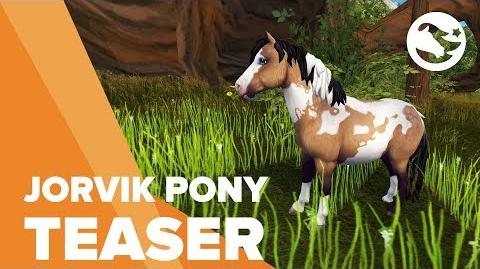 Five hairstyles can be purchased for the Gen 1 Jorvik Pony at the Horse Stylist. These styles are identical on all Gen 1 Chincoteague and Jorvik Pony (minus the default style) models.

The Gen 1 Jorvik Pony costs 200 sc and comes in 14 variations. All of them can be found at Ferdinand's Horse Market in the following color:

The Gen 3 Jorvik Ponies are sold for 350 SC. All six variations and can be found on the Pony barge at Fort Pinta.

A Gen 3 Jorvik Pony is available in Star Stable Horses. The fully raised foal can be bought for 350 SC.