The Jorvik Friesian is a fictional horse breed available in Star Stable Online.

"It's hard not to be awed when you see a Friesian horse galloping in an open Field, flowing mane, tail, and fetlock ruffling in the wind, and head held high.

For centuries, the Friesian has been a horse of desire - from a well-disciplined workhorse to a fearless medieval warhorse. Hailing from Friesland, a province in the Netherlands, the Friesian can trace its history back to the ancient world.

In the Middle Ages, Friesian horses were renowned as the mounts of knights and kings. Powerful enough to carry a heavily armored rider while maintaining the agility to navigate the Fields of battle, the Friesian is a breed that wins wars.

Friesians would go on to acclaim as both agricultural work horses and carriage horses, Finding their way throughout Europe and into the Americas. But between undisciplined crossbreeding with bulkier breeds, and industrialization making the sturdy work horses obsolete, the once treasured Friesian line Fell into obscurity and nearly disappeared entirely. Thankfully, in the early 20th century passionate breeders created a new studbook to preserve and promote the line, gradually returning the Friesian to its seat of honor.

Friesian horses are known For their high-set necks, animated gaits, and powerful legs and hindquarters. Traditionally the breed is known For the pitch-black color of their glossy coats and in some rare cases fiery chestnut, conjuring imagery of noble knights in shining armor. On Jorvik, breeders have Found success raising Friesian sport horses in a range of colors and markings. Regardless of coat color, all Friesians on Jorvik are renowned For their long-Flowing manes, perfectly suited to a range of grooming styles.

The Friesian 's grace and power, paired with a Loyal and enthusiastic temperament, allow them to excel in a variety of disciplines. Their draft roots make them excellent trotters, and, most recently, their striking presence has made them favorites in the dressage world. Their elongated gaits and beautiful frames make quite the statement in the arena.

In addition, the Friesians on Jorvik can execute a special move called the canter pirouette! You're sure to turn heads when you and your horse pirouette like royalty dancing at a ball.

If you're looking for a glorious companion with the bravery of a knight and the elegance of a queen, look no further than the Friesian". - Star Stable Description 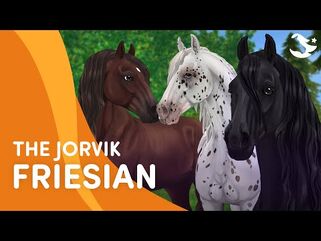 The Jorvik Friesian can perform a special move called the Canter Pirouette. The animation can be activated by pressing the spacebar, but only when standing still, otherwise the horse will jump instead of performing the move.

Six hairstyles can be purchased for the Jorvik Friesian at the Horse Stylist.

The Jorvik Friesian costs 950 SC. There are six variations and they can all be purchased at Jorvik Stables:

Note: The Black variation can be purchased at player level 1