Anything sour
Jessica is one of Dark Core's Dark Riders. She is one of the antagonists in Starshine Legacy: Legend of Pandoria and Star Stable Online.

Jessica has sleek layered raven black hair, which is always kept in a ponytail. Her eyes are bright green, with slightly noticeable eyeshadow around them. She has two known outfits, both all black, and wears black leather boots in both.

Jessica is incredibly competitive and determined. She seems to often cause trouble, and finds amusement at the cost of others. She is known to be passionate about fashion, and her looks. Jessica loses her temper quickly, and tends to be slightly more aggressive than her fellow Dark Riders. She seems to constantly feel a need to prove herself to Mr. Sands, causing her to act irrationally. She is known to especially harbour a hate for Anne Von Blyssen.

Towards the player, she has been seen to be slightly more lax and careless in her confrontations.

In The Winter Rider Jessica appears in a paddock near the Meander stables, claiming she really loves show jumping. After the introduction was made, she allows the player to proceed and try the race. She often gets hay for the horses from Eric Lowe.

Jessica tries to win the same modelling place in Glamour no. 5 as Anne, and tries to destroy Anne's pictures out of her will to win. Later, Jessica is watching Anne showing off together with Concorde at the Jorvik Stables. After the show, Jessica pats Concorde, and thereby sends his soul to Pandoria. From the visit to the stables it becomes apparent that Jessica is not a horse lover.

Later in the game, Derek and Anne discover that Jessica and her companions have stolen many of pictures that Derek took of Anne with his special camera. Jessica plans to use the pictures to take control over Anne and Concorde. When she opens a portal to Garnok's ship, Anne appears much to her surprise. Concorde kicks in Jessica and Mr. Sands into the portal, which would injure Mr. Sands badly.

In The Autumn Rider Jessica is suddenly a talented horse girl, and has completely changed from the girl who did not like animals in Starshine Legacy. Jessica runs the cross country race by the Firgrove Village, and at first, does not believe in the player's talent. She changes her mind after the player completes the race, and afterwards shows a softer side when she helps an injured bird.

In The Summer Rider, Jessica can be found in a paddock on an island next to Herman Castle, where she teaches the player pole bending.

At one point in the game, she steals Kora Pelletier's bird 'Beeper' for unknown reasons to the player. After racing after her, she eventually gives up in the fight, giving the bird back. She lets the player know Dark Core will not be stopped, and claims that she despises squirrels.

Jessica pretends to be a new student at the school where the Soul riders study. Together with Sabine, she constantly provokes fights and looks for trouble. She competes with Anne in a modeling competition and when the girl poses, Jessica makes fun of her in front of the other students. The photo session moves to the Jorvik Stables. Then Jessica charms Concorde, who gradually disappears from Jorvik and materialises in Pandoria. She also tries to take Derek's camera away, but Alex frustrates it.

Jessica tracks Alex on her way to the Cape Point Oil Rig. At the same time, she penetrates the mind of Anne, who is looking for Concorde in Pandoria, and tries to convince her that the other Soul Riders are not her friends. Jessica turns to Mr. Sands for help, but Sands ignores her and supports Sabine.

Following Alex, Jessica lets herself drift off for a moment and thinks about the Dark Star - where she comes from. She also mentions that it's not what it used to be anymore. Through the human body in which she is stuck, with time her truth moves away from her more and more. Then she focuses on Alex and Tin-Can again, and from the bottom of the sea, she hears a muffled roar, which means Garnok is impatient.

After a while, Alex turns back and passes Jessica, not recognising her. The girl is furious that nothing is going her way. However, he decides to leave Alex and rushes to the platform where the portal is located to stop Anne. Jessica catches up with her at the location where Concorde is being held and taunts her. She attacks Anne with the shadows, but after reuniting with her horse, she finds enough power to defeat Jessica and return to Jorvik.

Later, she rides with the other Dark Riders to Scarecrow Hill to destroy the golden apple, but while chasing the Soul Riders, she rides over an old bridge, which collapses underneath and falls into the abyss.

Jessica, like the rest of the Dark Riders, is not human, so she survives a fall from a bridge, but is badly battered. She and the rest of the generals return through the forest to the Dark Core headquarters. On the way, they come across the Soul Riders' camp, but Sabine decides to keep going. Jessica says the girls will pay for what they did to them.

Later on the Dark Core platform, along with the other generals, she deprives the Soul Riders and their horses of magical energy with the help of Mr. Sands and the portal Concorde throws the man into at the end of the ritual. Sabine, Jessica, and Katja are thrown off the platform into the icy water, but once again emerge unscathed. 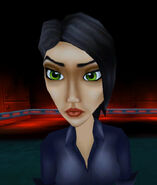 Close up of Jessica in SSO

Portrait of Jessica in Star Academy

Community content is available under CC-BY-SA unless otherwise noted.