"The Irish Cob originates from Ireland. A powerful horse with a calm temperament, the breed developed from the horses used by Irish Travelers in the old days to drag carts and wagons. The horse is friendly and easily trainable, known for it’s work spirit, and fits most uses.

The Irish Cob is often pinto colored but exists in all colors. The size varies within the breed; some can be almost the size of a pony while others the size of a workhorse. One exceptional feature is the extensive hoof hair as well as its long mane and tail." 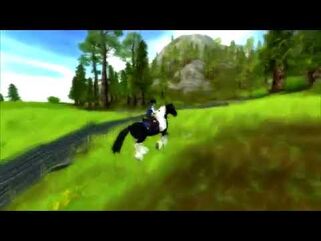 "There is magic in the air when you see a majestic Irish Cob trotting over a field, its voluminous mane and feathering blowing in the wind. While its sheer size can seem quite intimidating, one look into a Irish Cob's, warm eyes and you know, you've found a friend for life!

A horse originally bred by Roma in Ireland to pull their heavy caravans through the countryside Irish Cob, had to be a very strong, reliable, and robust companion, able to live on little food and endure any wind and weather. A mix of three different horse breeds, the Irish Cob inherited its size and kind temperament from the Shire horse, its stregth and agility from the Clydesdale, and its hardiness from the Dales Pony.

The Roma liked their caravans colorful and richly decorated, and naturally their horses had to be real showstoppers, too. The Irish Cob was the perfect match, rocking not only a magnificent mane and tail, and extravagant feathering, but also a distinct piebald coat. Irish Cob enthusiasts on Jorvik have taken this even further, introducing a variety of colorings to the breed. With the right grooming, they can even sport a distinctive beard!

Known for its extraordinarily calm and gentle temperament, the Irish Cob can be both, a patient partner for new riders or even a therapy horse, helping you overcome any obstacle! On Jorvik, the Irish Cob is especially popular with the druids of Valedale, who have refined the breed for cold resistance. Its thick and fluffy feathering keeps it warm and makes the Irish Cob into the ideal companion for expeditions into Jorvik's icier expanses

A horse that sports dramatic look and goes with you through thick and thin, the Irish Cob will be a loyal friend for snowy riding adventures!

(Note: Because of its magnificent feathering, this breed won't display leg wraps.)" 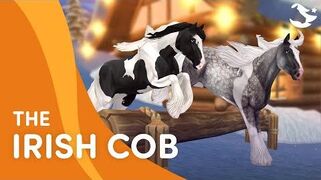 THE UPDATED IRISH COB – Arrives in Jorvik on December 18th! ✨

Five hairstyles can be purchased for the Gen 1 Irish Cob at the Horse Stylist. These styles are identical on all Gen 1 Irish Cob, and North Swedish Horse models.

10 hairstyles can be purchased for the Gen 3 Irish Cob at the Horse Stylist.

The Irish Cob sports heavy feathering on its legs. This long hair covering the horses' canon and fetlock means that the Irish Cob cannot wear leg wraps or open front boots in the game.

The Gen 1 Irish Cob is sold for 499 SC. All six variations can be found in Ferdinand's Horse Market.

The Gen 3 Irish Cobs are sold for 850 SC. All six variations can be found at Valedale Village.

An Irish Cob is available in Star Stable Horses. The fully raised foal can be bought for 850 SC.