The Icelandic Horse is a small horse breed available in Star Stable Online.

"It was in the late 1300's that the Icelandic horse was first brought to Jorvik by one of Iceland's great horse breeders, Jökull Tómasson. Jökull had, together with his daughter Brynhildur, spent many years in the Ottoman Empire, working for the wealthy trader Asil Birdal. When the Ottoman Emperor Murad I died in the summer of 1389, Jökull and Brynhildur decided to leave.

Since the 10th Century, it has been forbidden to return Icelandic horses to Iceland once they've already left, so Jökull and Brynhildur would have had to leave their beloved horses behind if they were to be able to return to their homeland. This could never be an option for them, and so they decided to take their horses to Jorvik one snowy, wintery day at the end of 1389.

The Icelandic Horse quickly became very popular amongst the islanders and are used today for both leisure riding as well as racing. Of all the wonderful qualities that make Icelandic horses unique, the most famous has to be it's special gait. In addition to the usual walking styles, the Icelandic horse also has a unique gait called the 'tölt'." 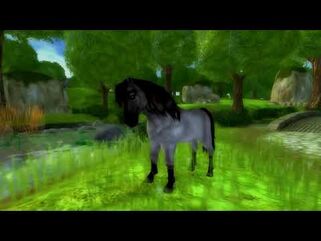 "Iceland is a place of timeless beauty and unforgiving elements and home to one of the world’s hardiest horse breeds. Horses arrived in Iceland with Viking explorers and were vital to survival, earning them a lasting reverence in Icelandic culture. The unforgiving climate ensured only the strongest survived, and in 982 a law was created forbidding horse imports, and any horse that left could never return. The result is a pure breed with no outside influences for over one thousand years.

The millennium of isolation, forces of nature, and breeding turned the Icelandic horse into a remarkably healthy breed, strong and clever, with a calmness that only comes from centuries without predators. Though pony sized they carry adults and pull heavy loads with ease and are considered horses. The Icelandic language doesn’t even have a word for pony! Icelandics are a gaited breed with two naturally appearing special gaits. The tölt is smooth and easy, ideal for travelling long distances without tiring the horse or rider whereas the flying pace is fast but exhausting, suited for short races. They are an exceptionally colorful breed with nearly every color and marking, including a color that only exists in one horse family! Ellert frá Baldurshaga was the first horse anywhere with the dominant white gene W21, which creates Ýruskjóttur, meaning "Speckle". Luckily, bringing the rare coat to Jorvik’s Icelandics was successful!

Icelandics fit their owners, ideal for work, pleasure, or competitive riding, and perfect for beginners as well as the most experienced equestrians. Breeding associations around the world give everyone the chance to ride an Icelandic, and Jorvik’s breeding program has flourished in recent years! To have an Icelandic horse is to have a loyal and true friend for life, who will brave blizzards to keep you warm and carry you home when you are hopelessly lost." 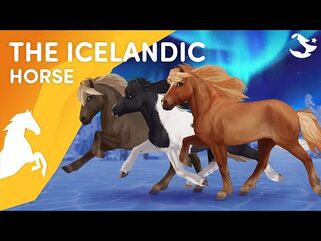 While most breeds in SSO only have five gaits, the Icelandic horse has six. This special gait is called the "tölt". In SSO no other horse breed is able to Tölt. To Tölt, the horse must be walking. The player then must hold down the 'Shift' key and then simultaneously hit either the up arrow or the 'W'. The Icelandic will then begin to Tölt. During the Tölt, the horse cannot move to a faster gait or jump. To stop Tölting, simply slow your horse down like you would with any other.

While all of the breeds in SSO have five gaits; Walk → Trot → Canter → Gallop → Fast Gallop, the Gen 3 Icelandic replaces the gallop with a special gait called the Flying pace. The Icelandic can jump from Flying Pace, just as it would be able to do in a gallop.

Five hairstyles can be purchased for the Gen 2 Icelandic at the Horse Stylist.

Seven hairstyles can be purchased for the Gen 3 Icelandic at the Horse Stylist.

The Gen 2 Icelandic is sold for 490 SC. All 10 variations can be found in New Hillcrest.

The Gen 3 Icelandic is sold for 950 SC and can all be found at New Hillcrest.

An Icelandic is available in Star Stable Horses. The fully raised foal can be bought for 950 SC.