The Hanami, is a fictional horse breed that is available in Star Stable Online.

"Jorvegian folklore abounds with tales of tree spirits appearing as horses and nearly every tree has its own story.

The Hanami belong to cherry trees and are a symbol of rebirth and herald of spring. Like blossoms, they are a reminder to treasure the beauty of today for it may be wilted and gone tomorrow, but will return again.

Word of Jon Jarl spread all the way to Japan. As a gift of friendship the Emperor sent cherry trees, which were planted in the long-since overgrown gardens of Doyle’s Abbey. The journey was difficult on the trees and it seemed they did not survive the winter, yet when spring came a few pink buds appeared.

With careful tending the trees lived. The garden was a favorite place to celebrate friendship. But the sakura eventually succumbed to the wilderness, the original trees dying until only one was left, and once more it did not seem to survive the winter.Yet when spring came the final tree produced one last giant bud that held a foal of blossoms and bark inside. The foal grew quickly but disappeared when the last cherry blossoms withered away, only to return the following year, happy in the garden.

In modern times, cherry blossom trees on Jorvik are few and far between, but the legend of the Hanami and the gifted sakura saplings lives on.

To the untrained eye, the Hanami appear as a regular Percheron working horse, but to those who are magically inclined, their flowing flowery manes and bark-like coat are a sight to behold.

Depending on their mood they can appear in their natural cherry tree color or as an ordinary horse. They are calm, happy to stop and smell the flowers and take in the natural beauty around them.

As companions they are steadfast and fearless, taking their rider into whatever adventures await." 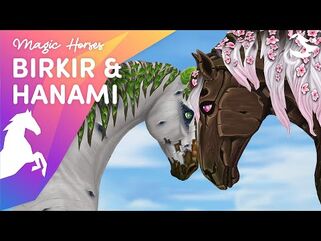 The Hanami is a magical horse with the special ability to change colors. When the player presses the "h" key or the magic horse icon on the horse's character sheet, the horse will change from its neutral colors to its natural (magic) colors and vice versa. The horse will not change colors during races or while the player is unmounted.

While most breeds in SSO only have five gaits, the Hanami has six. This special gait is called the "Moose Walk," a gait derived from the Percheron's high stepping extended walk. To make your horse do the Moose Walk, the horse must be walking. The player then must hold down the shift key and then simultaneously hit either the up arrow or the 'w' key. The Hanami will then begin to perform the special gait. During the Moose Walk, the horse cannot move to a faster gait or jump. To stop the Moose Walk, simply slow your horse down like you would with any other.

The Hanami is sold for 850 SC. It is sold by Gary Goldtooth and comes in one variation.