The Friesian Horse is a horse breed available in Star Stable: The Spring Rider and Star Stable Online.

"The Friesian Horse descends from an ancient bloodline that is thought to stretch all the way back to the ice age. The breed developed as a workhorse but became popular as a warhorse in the Middle Ages. Today the Friesian Horse is a popular and well-loved family horse with a great personality." 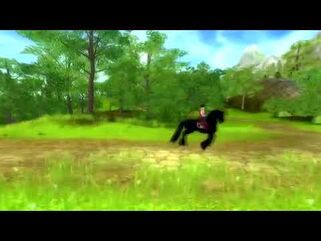 The Gen 1 Friesian cannot have its hairstyle changed at the Horse Stylist. This style is identical on all Gen 1 Andalusian, Friesian, and Friesian Sport Horse models.

The Gen 1 are sold for 300 Star Coins. All three variations can be found at Ferdinand's horse market.

Note: Friesians only come in one color, black. Hues have been assigned for easier distinction between the coats.

The Gen 2 Friesians cost 500 star coins. All three variations can be bought at Jarlasson Farm in the following shades: