"Few breeds are as recognizable and beloved as the intrepid Norwegian Fjord Horse. Combining the musculature of a draft horse with the nimbleness of small breeds, and with a silhouette that evokes prehistoric cave paintings, the Fjord Horse is a true icon in the Equestrian World!

The Fjord Horse is amongst the breeds in the world. Findings in viking burial sites indicate that the Fjord and it's closest relatives have been domesticated and selectively bred for over 2000 years.

Today, all Fjords carry the dun dilution gene on any of the three base coats bay, black, and chestnut. A smaller number also show the influence of the cream gene, with the rarest variation of all, the "kvit" (Norwegian for white) possessing a double cream dilution. Most striking are their distinctive primitive markings - a dark dorsal stripe in the mane and tail, as well as stripes on the legs and withers.

The Fjord is truly a jack of all trades. Sturdy enough for field work and forestry, it is also an excellent riding choice for leisure riding and competition. With it's mild temperament (you could even call them"bomb proof!"), the Fjord is also popular choice for riding schools and therapeutic riding.

These lovable companions won't falter under the toughest conditions, so whether your horse adventures take you to the icy cold of Dino Valley or the rugged trails of Mistfall, you can't go wrong with a Fjord! 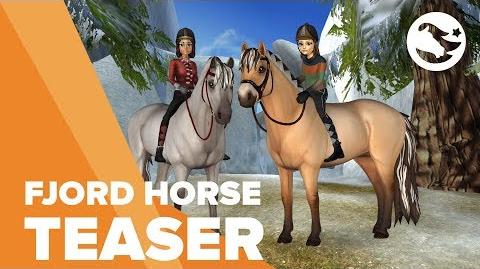 Eight hairstyles can be purchased for the Gen 3 Fjord at the Horse Stylist.

The Gen 3 Fjords are sold for 850 SC. The six available variations can all be purchased in Valedale.

Note: Fjord dun variations have their own special names

A Gen 3 Fjord is available in Star Stable Horses. The fully raised foal can be bought for 850 SC.