The Fawncy is a fictional horse breed in Star Stable Online.

"Jorvik is home to beautiful and majestic breeds from around the world, but the most amazing horses of all can only be found on this island. Horses with manes and tails in rainbow colors beyond imagination, horses that shimmer like jewels or burn with the fury of the elements -- these are the Magic Horses of Jorvik!

When riding through the wintery woods near Meander Village, the shy deer you glimpse hiding in the brush might not be a deer at all. It might be the most beloved of Jorvik's magical horses - Fawncy!

This spotted wonder seldom leaves its woodland home, preferring the company of rabbits, skunks, and foxes to other equines. To better avoid forest predators, Fawncy has evolved to be almost completely odorless. Even resting, it's heart beats twice as fast as a normal horse, which amplifies its skittish character.

Fawncy prefers a diet of ferns, clover, shoots, and especially wild berries, but when kept in a stable, they adapt readily enough to hay. Solitary by nature, if Fawncy must be in a stable, it would rather be in a box as far from other horses as possible and definitely away from any dogs.

Like other Magic Horses in Jorvik, Fawncy shows its true colors in wild places and will conceal its appearance in populated areas. Whether in its magical "roebuckskin" form or disguised to blend in with other horses, Fawncy rides just like the Andalusians it is descended from." 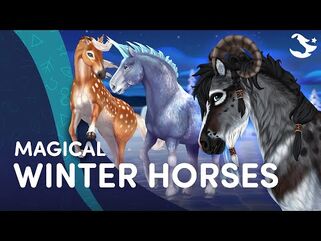 The Fawncy is a magical horse with the special ability to change colors. When the player presses the "h" key or the magic horse icon on the horse's character sheet, the horse will change from its neutral colors to its natural (magic) colors and vice versa. The horse will not change colors during races or while the player is unmounted.

As the Fawncy shares its model with the Gen 3 Andalusians, it can perform their special move called the Spanish Walk. The animation can be activated by pressing the spacebar, but only when standing still, otherwise the horse will jump instead of performing the move.

The Fawncy is sold for 950 SC and can be purchased during Christmas in the Winter Village. It comes in one variation.