Dorcha, is a fictional horse breed that is available in Star Stable Online.

"In Ireland, legend says butterflies can cross over from the human world to the otherworld. On Jorvik that other place has a different name, Pandoria, and it is a rare breed of magical horse, not butterflies, who cross over...

Dark as the night, Dorcha is known as the guardian of the caves. They are the skittish sort, rarely coming to the surface and avoiding pink cracks that break through the cave floors, unlike their purple-maned counterparts.

Traversing the dim caverns has given Dorcha excellent special awareness, but they can be agitated in open fields as they're used to the narrow caverns. Stories say that if a traveler gets lost in the winding caves, Dorcha will help, guiding them to the surface but stopping just short of the light.

Their name comes from the Irish word for darkness and mystery, alluding to the temperament of this shy and enigmatic creature. Dorcha's coat has many 'eyes' that closely resemble a peacock's feathers. Jorvegian storytellers allude this to the peacock butterfly, passing between worlds as the legends tell.

Like other Magic Horses in Jorvik, Dorcha shows its true colors in wild places and will conceal its appearance in populated areas. Whether in its magical form or disguised to blend in with other horses, Dorcha rides just like the Irish Cobs it most resembles." 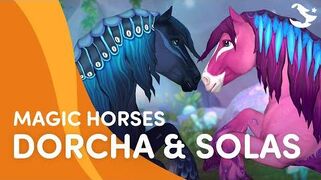 The Dorcha is a magical horse with the special ability to change colors. When In the wild, it changes from its neutral colors to its natural (magic) colors. When the horse approaches Jorvik's different villages, it regains its more realistic colors. The Dorcha evolved from contact with energy from Pandoria to the point where its magical ability is entirely its own.

The Dorcha sports heavy feathering on its legs. This long hair covering the horses' canon and fetlock means that the Dorcha cannot wear leg wraps or open-front boots in the game.

The Dorcha is sold for 850 SC. It is sold by Gary Goldtooth and comes in one variation.