The Curly Horse is a horse breed available in Star Stable Online.

"With its distinctive wooly coat, the Curly is as cuddly as a teddy bear, but beneath its plush exterior is the brave heart of a grizzly. If you’re looking for a clever companion with a friendly disposition and exceptional endurance, the Curly ticks all the boxes!

But where does the Curly’s remarkable coat actually come from? The horse world is divided about the Curly’s origin in the Americas, leading to different breed names and studbooks for horses of similar traits. Some believe that the Curly descends from the Russian Bashkir, while others cite evidence that curly coats have been present in Mustangs in the American Midwest since at least 200 years. During the Curly’s early years of recognition, other breeds were mingled into the studbook as well, such as the gaited Misourri Fox Trotter.

Whatever the origins, once you’ve run your fingers through its soft, crimped hair, it is clear the Curly is one of nature’s miracles! But the Curly’s unique coat and kinky mane are not merely appealing to the eye. Their hair is hypoallergenic, allowing even those with horse allergies to ride them without incident.

Calm, hard-working, and very intelligent, Curlies make excellent horses for new riders and serious competitors alike. They are all-rounders with exceptional stamina, perfect for riders that enjoy a variety of disciplines, both English and Western, but they particularly excel at trail riding. While in the rest of the world, only a small portion of Curlies are gaited, on Jorvik, all Curlies are born with this exceptional trait! Called the “Curly Shuffle,” this signature gait is perfect for loping along Jorvik’s many trails.

Whether you’re looking for a gaited companion for hacking about or a hard-working competition horse that won’t upset allergies, the cozy Curly is sure to bring joy to your stable". 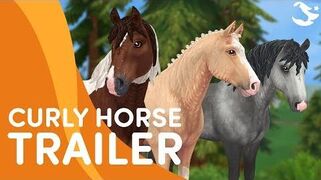 While most breeds in SSO only have five gaits, the Curly horse has six. This special gait is called the "Curly Shuffle". To make your horse do the Curly Shuffle, the horse must be walking. The player then must hold down the Shift key and then simultaneously hit either the up arrow or the 'w' key. The Curly will then begin to perform the special gait. During the Curly Shuffle, the horse cannot move to a faster gait or jump. To stop shuffling, simply slow your horse down like you would with any other.

Five hairstyles can be purchased for the Curly Horse at the Horse Stylist.

The Curly Horse can be purchased for 850 Star Coins. There are six variations available and they can all be found in Firgrove.

A Curly is available in Star Stable Horses. The fully raised foal can be bought for 850 SC.