The Chincoteague Pony is a pony breed available in Star Stable Online, and Star Stable Horses.

"This unusual pony has a truly mysterious and sad history. From the Assateague Island, spread across the two states of Maryland and Virginia in the USA, the Chincoteague has lived and developed in peace and freedom for many generations. How they got there in the first place is a mystery, but theory has it that today's Chincoteague are descended from the horses travelling upon a Spanish galleon which sank off the island in the 16th century.

Life on the island has never been easy. Not much grazing, terrible storms, and heavy inbreeding have all combined to almost eradicate the little population. Crossing the Shetland and Welsh Ponies have strengthened the breed, and contributions from the public as well as efforts from the local fire brigade have all worked to make the Chincoteague strong and viable again.

The Chincoteague still live wild on their island, but once a year they're gathered together and a select few colts are auctioned off. The proceeds from the auction go towards caring and protecting the herd." 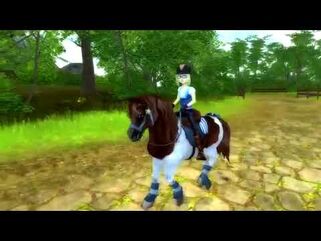 "In a world of stables and studbooks, where breeds are held to the rigorous standards of human riders, there is something irresistibly romantic about feral horses, living free in the wild. And perhaps no feral horse population is as beloved as the Chincoteague Ponies of Assateague Island.

Popular legend speculates that the herds are decided from the survivors of a Spanish galleon that shipwrecked off the coast of Virginia in the 18th century. Whatever their true origin, the ponies have roomed wild on Assateague for over 200 years.

The Chincoteague captured the American public's imagination after the publication of 'Misty of Chincoteague,' Marguerite Henry's classic novel, inspired by the annual 'Pony Swim,' in which a portion of the population is herded by 'Salt Water Cowboys' from Assateague island across the channel to the neighboring Chincoteague. There, ponies are auctioned off in order to prevent overcrowding and to raise conservation funds.

While known as a pony, some consider the Chincoteague a horse, as it's stunted stature isn't genetic, but is rather the result of a nutritionally harsh diet or salt marsh grasses and shrubs. In order to compensate for high salt intake, the ponies drink almost twice as much water as a typical horse, which gives many Chincoteagues a plump appearance.

The ponies have short, strong legs, thick manes, and a friendly disposition. Chincoteagues can be found in a range of colors and coats, with distinctive pintos proving most popular.

Today, the wild Chincoteague population remains steady, with around 300 ponies roaming free on Assateague island. Meanwhile, the spiritual descendants of 'Misty' and her herds flourish off the coast of the island, bringing the romance of Chincoteague to the rest of the world, even to Jorvik!" 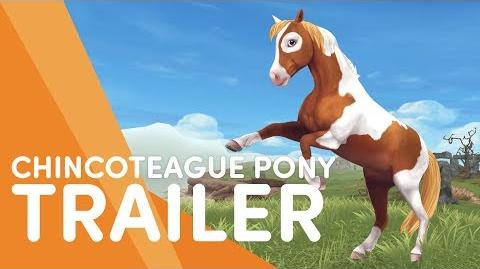 Five hairstyles can be purchased for the Gen 3 Chincoteague at the Horse Stylist.

The Gen 1 Chincoteague Pony can be purchased for 230 SC. All three variations can be found at Ferdinand's Horse Market.

The Gen 3 Chincoteague Pony can be purchased for 700 SC. The six variations can all be found at South Hoof Farm:

A Gen 3 Chincoteague Pony is available in Star Stable Horses. The fully raised foal can be bought for 700 SC.