The Andalusian, is a horse breed available in Star Stable: The Spring Rider, Star Stable Online and Star Stable Horses.

"Andalusians come from southern Spain and are descended from the Spanish horses of the middle ages. These majestic runners are used in all kinds of equestrian events. They are easy to train and sturdy with a friendly disposition that has made them very popular over all Jorvik." 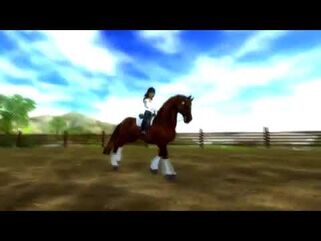 "Few horse breeds are as intricately woven into the history of Europe as the Andalusian.

To fully explain their origin and history is to delve into the history of Spain itself, for the medieval "Al Andalus" described the Muslim part of Spain where breeding and equestrian culture flourished and laid the foundations for many modern breeds.

While the terms Andalusian and PRE (Pura Raza Española) are often used interchangeably, only horses that are approved for the official studbooks are officially classified as PRE's.The dos famous bloodline of Andalusians was established in the 1500's by the Carthusian moms of Jerez de la Frontier. Horses carrying these bloodlines, called 'Cartujanos' are still highly sought after today and are as rare as they are beautiful.

Their agile and compact build and their elegant. elevated movements make the Andalusian an ideal riding horse, and it was prized among European nobility for centuries.

In its land of origin, however, the 'Horse of Kings' was a valuable companion for everyday tasks and used in all areas of the Spaniards' lives. Andalusians excel at working with livestock, pulling carriages, or presenting themselves as proud parade horses during 'ferias'.

preserve through the centuries by rigorous selection and strict breeding criteria, their appearance hasn't changed drastically. The Andalusian is a well-balanced horse with good proportions and strong, round croup, giving them a natural capacity for collection.

They are versatile horses who an be found in all areas of modern equestrian sports, but they true talent lies in classical dressage were they can be trained to the highest levels of the Haute École.

The evocative image of the fiery Spanish horse, confident and noble in its bearing, is deeply embedded in equestrian culture and origin of many a horse owner's dreams.

If you are looking to fulfill your dream of a royal baroque horse, the Andalusian is your best bet" 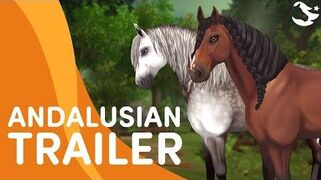 The Generation 3 Andalusian can perform a special move called the Spanish Walk. The animation can be activated by pressing the space bar, but only when standing still, otherwise the horse will jump instead of performing the move.

Six hairstyles can be purchased for the Gen 3 APH at the Horse Stylist.

The Gen 1 Andalusians are sold for 320 SC. The six variations can all be found at Ferdinand's Horse Market.

The Gen 3 models are sold for 950 SC. The variations can be found in the following locations:

Note: Horses marked as "Limited Release" are only in the game for limited periods of time and are not always available.

A Gen 3 Andalusian is available in Star Stable Horses. The fully raised foal can be bought for 950 SC.