The Akhal-Teke is a horse breed available in Star Stable: The Winter Rider, Star Stable Online, and Star Stable Horses.

"It is known as the 'Golden Horse.' With a sleek body evoking the cheetah, a fine coat that can take on a metallic sheen, and a lineage 3,000 years old, the Akhal-Teke is without a doubt one of the most exotic and cherished horse breeds in the world.

The Akhal-Teke breed was honed by the nomadic tribes of Turkmenistan, who used the horse for raiding and needed a horse capable of enduring the harsh climes of the Karakum desert. In the 19th century, Turkmen rode their horses in a valiant defense against the invading Russian soldiers. While the Turkmen could not stop the march of the Russian Empire, their amazing horses so impressed the Russian general that he created the first studbook and renamed the breed the Akhal-Teke after the Akhal oasis and the Teke tribe who lived there.

Today there are only around 6,000 Akhal-Tekes in the world, mostly in Russia and their native Turkmenistan, where the horse is a national treasure.

The Akhal-Teke has a svelte body that is athletic without being overly muscle. Even more striking is the breed's fine coat, which combined with the cream gene can result in an otherworldly metallic shimmer. The hair is so fine that many Akhal-Tekes have little mane and no forelocks at all.

Famous for its endurance, the Akhal-Teke is an excellent all-around sport horse, competent at dressage, racing, and even show-jumping. You can expect your Akhal-Teke to be an alert and sensitive companion. Like the Arabian, the Akhal-Teke is a hot-blooded breed uniquely suited for life in the desert.

Whether you are looking for a partner to race over rocky deserts or strut in the dressage arena, you will be sure to stand out from the pack with a rare and majestic Akhal-Teke. The 'Golden Horse' is truly a horse to treasure!" 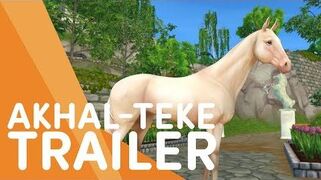 Five hairstyles can be purchased for the Gen 3 Akhal-Teke at the Horse Stylist.

The Gen 3 models cost 850 Star Coins. They can be found in Silverglade Equestrian Center.

A Palomino Gen 3 Akhal-Teke is available in Star Stable Horses the fully raised foal can be bought for 850 SC.